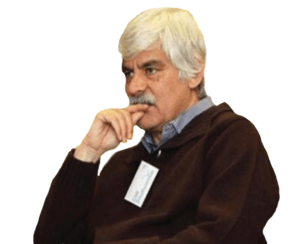 He was born in India and spent my early years by the banks of the Bramaputra River in Assam.  When I was 10 years old, my family came to England and I spent my teenage and early twenties in London. Caught up with the radical movements of the late 60s and early 70s, I found myself involved in left wing politics where I learnt to organise and see things critically.

He was drawn to the then vibrant voluntary sector, working as an unqualified social worker for a family service unit, exposing me to the realities of being poor in North London. Driven by a desire to bring about change, I became the co-ordinator of a community newspaper (Brent Hard Times), then set up and led one of the biggest tenants associations on the new Tower Block estate where I lived (in Stonebridge) for five years.  Mixing with local innovators, I became involved in one of the first voluntary advice centres in Harlesden, following an occupation of the empty Gas Board premises. I went on to create an early community transport project (Brent CT) where I became Chair and then Coordinator.

At the end of the 70s, I took time out and enrolled on a Youth and Community Course at Ilkley, fell in love with the North of England and never returned to London.  I became the Manager of a Community Transport Project, Community Routes of Hattersley near Manchester. This was a devastated and neglected community where I came to understand that money and employment were the key to restoring pride and well-being.  So, Community Routes set up six viable businesses in three years, employing two dozen local people. As the voluntary structure no longer suited our purpose, we changed to become England’s first community cooperative using a company limited by guarantee (CLG) legal form with social licences, social auditing and a holding company structure. This became the model adopted by the Development Trusts Association later that decade.

Community Routes was one of the stars of the new community enterprise ‘movement’ and I was elected  the North West England representative of Community Enterprise UK. This led to me becoming one of the Directors of an Action Research project called Community Economy Ltd, which is still going today. After leaving Community Routes, I became a business and cooperative adviser.  I became disillusioned (and still am) with the organisation of business advice. Seeking alternatives with some friends (and no money) we bought an empty mill in the middle of Manchester to set up the second “Managed Workspace” in the UK (23 New Mount Street).  Working with our voluntary sector tenants and combining it with an understanding of how to create communities, our managed workspaces were far more successful in terms of creating healthy viable businesses than those replicating us in the private and public sectors.  We soon had four large workspaces and I moved to the Midlands to set up and manage West Midlands House in Walsall with over 200 tenants.

Sadly, phenomenally high interest rates in the 90s (thank you Mrs Thatcher) and the terminal illness of my friend and fellow Director John took the wind and profits out of the business. During that time, however, I learnt a lot of about running a multi-million pound business and what is to be a wealthy man – a hollow experience that I do not miss. I left the company.  By the time my colleagues sold the workspace company, I had returned to my passion, community enterprise.  This time I worked with my friend, Freer Spreckley.  We decided to apply the key lessons we learnt in communities to all business activities and changed our language to “social enterprise”.  That is how we came to set up Social Enterprise Partnership in 1994, own the domain www.socialenterprise.co.uk, evolve into Social Enterprise Europe Ltd  (2003) and then Social Enterprise International Ltd (SEi). Our latest venture is SEi (FairShares) Ltd, the sponsor for the 7th EMES conference.